Earth from Space: the moraines of Malaspina

The remarkable moraine patterns of Malaspina Glacier – the largest piedmont glacier in the world – are featured in this false-colour image acquired by Copernicus Sentinel-2.

These are images of Saturn’s moon Titan, captured by the NASA/ESA/CSA James Webb Space Telescope’s NIRCam instrument on 4 November 2022. The image on the left uses a filter sensitive to Titan’s lower atmosphere. The bright spots are prominent clouds in the northern hemisphere. The image on the right is a color composite image. Click here for an annotated version of this image.

Titan is the only moon in the Solar System with a dense atmosphere, and it is also the only planetary body other than Earth that currently has rivers, lakes, and seas. Unlike Earth, however, the liquid on Titan’s surface is composed of hydrocarbons including methane and ethane, not water. Its atmosphere is filled with thick haze that obscures visible light reflecting off the surface.

Scientists have waited for years to use Webb’s infrared vision to study Titan’s atmosphere, including its fascinating weather patterns and gaseous composition, and also see through the haze to study albedo features (bright and dark patches) on the surface. Further Titan data are expected from NIRCam and NIRSpec as well as the first data from Webb’s Mid-Infrared Instrument (MIRI) in May or June of 2023. The MIRI data will reveal an even greater part of Titan’s spectrum, including some wavelengths that have never before been seen. This will give scientists information about the complex gases in Titan’s atmosphere, as well as crucial clues to deciphering why Titan is the only moon in the Solar System with a dense atmosphere.

Note: This post highlights data from Webb science in progress, which has not yet been through the peer-review process.

When a flash of light appears somewhere in the sky, astronomers notice. When it appears in a region of the sky not known to host a stellar object that’s flashed before, they really sit up and take notice. In astronomical parlance, objects that emit flashing light are called transients.

Earlier this year, astronomers spotted a transient that flashed with the light of a trillion Suns.

In this case, it was the Zwicky Transient Facility (ZTF) that spotted the flash. The ZTF is an all-sky survey aimed at the northern night sky. It’s hosted at the Palomar Observatory, and it’s a systematic study using an extremely wide-field optical light camera to scan the entire northern sky every two days. It’s part of what’s known as Time-Domain Astronomy, the study of astronomical objects that change over time.

When the ZTF spots a new transient in the sky, other astronomers are alerted. The ZTF isn’t suited to studying objects in detail. It just finds them and then passes the baton to other facilities that are better suited for observing astronomical objects in greater detail. In this case, a whole group of facilities took part.

Hubble Space Telescope observations in optical and infrared combined with data from the Jansky Very Large Array pinpointed the flash’s precise location. The European Southern Observatory’s (ESO) Very Large Telescope (VLT) determined that it was 8.5 billion light-years away. Observational data from other facilities followed, giving astronomers a picture of the flash across a wide swath of the electromagnetic spectrum. 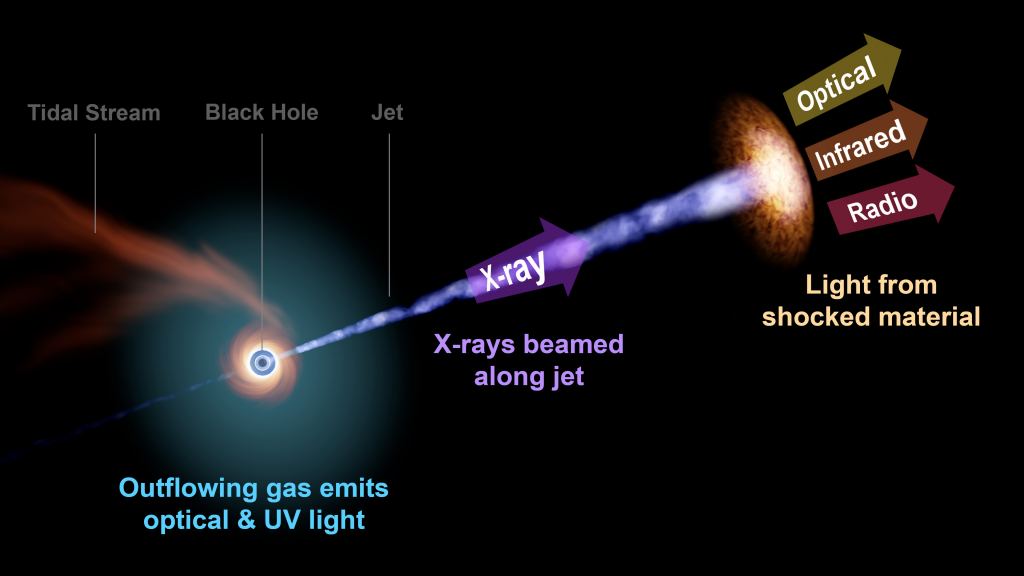 Continuing a “drama-free” test flight, NASA’s Orion spacecraft is set to fire its main engine Thursday to leave a distant orbit around the moon, heading for a flyby close to the lunar surface next week to swing onto a trajectory to bring it back to Earth for splashdown in the Pacific Ocean on Dec. 11.

The burn with the Orion spacecraft’s orbital maneuvering system engine is planned at 4:53 p.m. EST (2153 GMT). The 6,000-pound-thrust, hydrazine-fueled engine will fire for 1 minute and 45 seconds, enough to nudge the spacecraft out of its distant retrograde orbit around the moon, where it’s been flying since Nov. 25. The maneuver will change Orion’s velocity by roughly 310 mph (454 feet per second; 498 kilometers per hour).

The orbit departure burn is the fourth of five main engine firings the Orion spacecraft will execute on on NASA’s Artemis 1 mission, a test flight of the agency’s new deep space capsule and heavy-lift rocket before astronauts strap in for a trip around the moon on Artemis 2, scheduled for late 2024. NASA plans to land astronauts on the moon beginning with Artemis 3, debuting a commercial moon lander derived from SpaceX’s Starship rocket program.

Artemis 1 launched Nov. 16 from NASA’s Kennedy Space Center in Florida on the inaugural flight of the Space Launch System moon rocket, a 322-foot-tall (98-meter) behemoth that took a decade and more than $20 billion to develop.

Meteorites reveal how they brought space water to Earth

Meteorites that fall to Earth are ancient time capsules, and scientists who merged two imaging techniques may be able to tell us if and how they brought water to Earth.

Brand-new images from the James Webb Space Telescope and the Keck Observatory in Hawai'i reveal clouds beneath the haze on this enshrouded moon.

It's been a cloudy season for Saturn's largest moon, Titan.

Constraints are critical in any scientific enterprise. If a hypothesis predicts that there should be an observable phenomenon, and there isn’t any trace of it, that’s a pretty clear indication that the hypothesis is wrong. And even false hypotheses still move science forward. So it is with astronomy and, in particular, explorations of the early universe. A paper authored by researchers at Cambridge and colleagues now puts a particularly useful constraint on the development of early galaxies, which has been a hot topic in astronomy as of late.

Part of the reason that has been a hot topic is that, for the first time, we’re starting to get telescopes capable of peering back that far. The James Webb Space Telescope sparked much hope for being able to peer back to the earliest stars. However, while that instrument is still going through its data collection phase, plenty of other highly capable telescopes can provide some insight as well.

One of those is the SARAS3 radio telescope, which is deployed over a lake in India. It monitored some of the light coming from the earliest galaxies and provided data to the team from Cambridge, who analyzed it, looking for one defining feature.

UT video on the early universe.

Known as the 21-cm hydrogen line, this is the spectrum that hydrogen emits when its electron changes state. It’s been used consistently in Early Universe Cosmology since its discovery in the 1940s, largely because it can make its way through the cloudy dust that shrouds the volume of the early universe. That ability also makes it capable of passing effortlessly through Earth’s atmosphere, allowing it to be easily detected by a ground-based telescope like SARAS3.

What was notable in the Cambridge paper was the lack of the 21-cm line. In fact, this common line that is so widely used in other parts of cosmology seemed to be absent from the galaxies that existed only 200 million years after the Big Bang.

SpaceX is at it again! Yesterday (November 29th), the company conducted another static fire test with the Booster 7 (BN7) prototype at its Starbase in Boca Chica, Texas. The test began at 02:42 p.m. EST (11:42 a.m. PST) and saw eleven of the BN7’s thirty-three Raptor 2 engines fire for 13 seconds. While static fire tests have been the norm these past few months, this latest might be the prelude to the orbital test flight Musk has been hinting at for close to a year. News of the successful test was shared via Twitter, while NASA Spaceflight (NSF) shared footage of the test via Youtube.

The last time SpaceX conducted a static fire test with the BN7 was on November 17th, when fourteen of its Raptor 2 engines were fired for thirteen seconds. Before that, SpaceX conducted a test on September 19th, where the BN7 fired seven Raptor 2 engines for about seven seconds. These tests came after many months of stacking and unstacking and repeatedly revised estimates of when the orbital test flight may occur. Musk previously indicated it might fly in May, July, and sometime in November.

But after the September 19th test, Musk offered a more detailed assessment of when the Starship could be ready to go to space. After sharing NASA Spaceflight’s footage of the test via Twitter, NSF Managing Editor Chris Bergin and Musk got into a brief conversation. When Bergin asked Musk when the orbital flight might happen, he replied, “Next test is ~20 sec firing with max oxygen fill to test autogenous pressurization, possibly one more static fire, then orbital launch attempt.” In short, Musk claims that another static fire is likely to follow this one, followed by an orbital flight.

While Musk did not indicate when that might happen, it’s a safe bet that it won’t take place before 2023. If successful, the flight test will make the Starship and Super Heavy the most powerful launch system in history. The title used to be held by the Saturn V rocket that took the Apollo astronauts to the Moon and is currently held by NASA’s Space Launch System (SLS). The SLS earned this title after launching from the Kennedy Space Center in Florida at 01:47 a.m. EST on November 16th (10:47 p.m. PST, November 15th)

The Artemis I mission has subsequently established a new record for the farthest distance ever achieved by a spacecraft. The uncrewed Orion vehicle also took some amazing photographs of the Moon and the Earth-Moon system in the process. NASA has already contracted with SpaceX to provide the Human Landing System (HLS) for the Artemis III mission, which is currently scheduled for 2025. This historic mission will see astronauts land on the lunar surface for the first time since the Apollo Era.

China has 6 astronauts in space for the 1st time

China currently has six astronauts in orbit for the first time as the country carries out a space station crew handover.

Saturn V, space shuttle Pathfinder up for 'adoption' to aid in artifact preservation

You can now take an aerospace relic under your "wing" and help give it the care it needs. The U.S. Space & Rocket Center Education Foundation has launched an "Adopt an Artifact" program.

This page is available to Spaceflight Now members only

Support Spaceflight Now’s unrivaled coverage of the space program by becoming a member. Your monthly or annual membership will help us continue and expand our coverage. As a supporter of the site you will also gain access to bonus content such as this page.

We appreciate your support.

A new video shows how a team of NASA and European Space Agency spacecraft plan to relay Martian rock samples to Earth.

See the moon visit Jupiter in the sky tonight (Dec. 1)

On the first day of December the moon will appear in conjunction with Jupiter, the solar system’s largest planet.

Solar storm from 'canyon-like' hole in the sun could hit Earth as soon as Thursday (Dec. 1)

The hole could beam solar material outwards at speeds up to 1.8 million mph (2.9 million kph)

Watch an egg fall from near space — and survive (video)

A former NASA engineer and now-YouTuber has created a viral sensation with a video documenting efforts to send an egg to near space to test if it cracks up on landing.

NASA's Orion capsule will perform a crucial engine burn to depart lunar orbit Thursday (Dec. 1) at 4:54 p.m. EST, and you can watch the action live.

NASA's Space Launch System megarocket hit all of its marks during its first-ever liftoff two weeks ago, agency officials said.